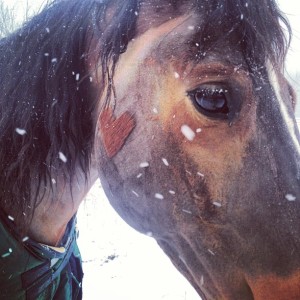 Rivaldo is a 17.3 hand bay Saxon-Oldenburg, which is a type of war horse.  He was born into a royal family in East Germany and owned by a real duke!  However, his playful and emotional personality quickly turned him into too much of handful for his trainers, and he was sold as a jumper prospect to a barn in the United States.  Jennifer and Rivaldo eventually found each other, and they’ve been best friends ever since.  Rivaldo has traveled with Jennifer to many different states, including Indiana, California, Ohio, Kentucky, and New York.  He loves to jump, wrangle cows, and play out in the field.  His best friends are Gabriel and Sura.