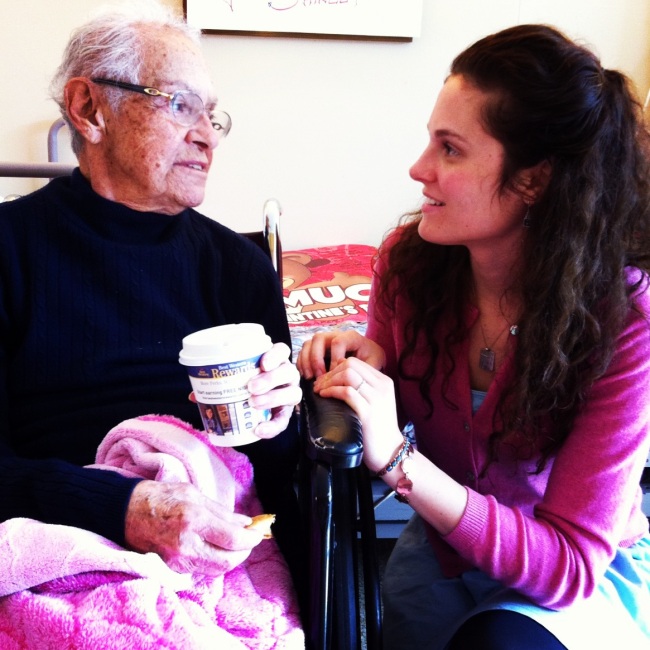 Tonight, my sister and I lost our grandmother.

When the phone call came, I wished for one more time sitting at her feet and hearing her stories about the time my baby sister escaped out of her crib and what it was like during the Great Depression—when a loaf of bread was 10 cents—and the time she went camping with two toddlers in the middle of the woods, and how she met her beloved husband, Dave, and all the times they rented horses for an afternoon to go riding, only for her mother to launder her riding outfit three times successively because she could not deal with the scent of horses. My grandmother said that anyone who cannot appreciate the smell of horses was bad news, mother or not.

I have more memories of my grandmother than anyone else. She taught me to tie my shoes and play cribbage and knit and that grilled cheese is best with bread-and-butter pickles. We probably ate at least 5568 grilled cheeses together. And 7000 packages of lemon drops.

She let me pour the cream in her coffee when we went out to breakfast and she said a little chocolate with every meal never hurt anyone. She lived to be 94, so I guess this must be true.

Unlike our parents, she was always early picking my sister and I up from school, which is a great comfort to a girl who was always anxious to escape from people—even school kids—to spend the afternoon recovering from an entire day’s worth of people—especially school kids—among her animals and in her box forts and from underneath the pine tree in the backyard, which she was once certain was a great and vast wilderness. She had a kind, compassionate grandmother who never bothered to correct her.

Our grandmother came to every school program, every horse show, every Easter, Thanksgiving, and Christmas, and every living room show that typically followed. She used phrases like “Two-ton-Betsy” and “kaniption fit” and “gosh-by-golly-gee-whiz” and “ohhh-la-la” and I never knew what they all meant, but I always knew what she was saying when she used them.

She was there when I fell on a cactus in Arizona and had prickles in the most uncomfortable of places. As she fixed me up, she never said a word or told a soul or even laughed, which must have been a feat. Somehow, she knew modesty is everything to a serious 10-year-old horsewoman.

After my first adventure to the Canadian side of Lake Huron, in which I proceeded to gather every single shore rock I found, as they all appeared to be more precious than jewels or pirate treasure, she sat with me the whole day after, as I washed them and showed her each one, one-by-one. She handled and inspected and admired them as intently as I did. She relived the whole adventure with me and seemed to find the same awe in found, ordinary, wet lake rocks as I did. That means the world to an adventurer.

She claimed to be too dumb to help me with my elementary school homework (which wasn’t true), but she sat there with me while I figured it out for both of us. She used to worry I spent too much time reading books, but she’d keep my little sister especially occupied while I hid out in one of my many “secret” forts to read for hours, happy and on my own. And sure enough, if I was in there long enough, she’d slide a grilled cheese and a glass of milk under the trap door. She never blew my cover on the days I was a cowgirl, a Cherokee Warrior, a power ranger, a pioneer on the Oregon trail, a runaway, an astronaut, a Bedouin, a mermaid, a bird, or Anne…with an “E.”

When I got a little older, she drove me to my riding lessons and on one, particularly memorable winter day, she stayed with me in the freezing barn while I desperately tried to soak my stubborn horse’s tender sole in a bucket of water and Epsom salts in -10 degree weather. She never complained or hurried me along. And then, to soothe my worries and my grumbling stomach after a 6-hour escapade, she took me out for hamburgers and hot chocolate with whip cream. It was that day that I was first aware that grandmothers are old, and maybe 6 hour days out in the cold aren’t good for them.

She cheered me on in college, even though she could never pronounce what I was studying. She asked about the horses. She sent me birthday cards in Montana and California. The last time I saw her, which was just two weeks ago, she wanted to know if I was warm enough and if I had a boyfriend. I could even speak for her, based on what her eyes told me, once the Alzheimer’s took away some of her words.

She always said she wasn’t afraid to die. And that the good Lord was indeed a good Lord.

But the really big thing is that she introduced me to horses. My whole life, since the age of ten, has been defined and guided and determined and scheduled around horses, which is a life and a life passion started and inspired by no one else but her. I do not know who I would be without horses. I wouldn’t be writing this from a farmhouse. I wouldn’t be a cowboy or a sailor or an actor. I wouldn’t be a PhD student. I wouldn’t have a zebra in the barn or anything to write about or take pictures of or have the very best of friends…horses.

I think every true horsewoman passes on her gift and love and ability and passion for horses to one person, and for some reason, she chose me.

You might say that I had the best grandmother that ever lived, but the truth is, she wasn’t really my grandmother, at least, not by blood. And for some reason, that doesn’t count the same in everyone else’s eyes, although everyone thinks it’s very funny and sweet of you, when you tell them you adopted a grandmother. Little do they know the profound gift of love you are given when a grandmother adopts you.

Blood is thicker than water, and in this way, everyone is given grandmothers who are obligated to be. Instead, I had one who wanted to be, and she gave me everything. She loved me and my sister and my parents as her own and with everything she had. And she sent me on my way a long time ago, knowing I’d be okay, because in the ways people couldn’t relate or help or guide or teach or befriend me, horses could and always would. She knew before anyone, and in this way, she set me right…she set my heart to galloping hoof beats and streamed my blood to independence, adventure, and open space, as under no other circumstances, do horses run wild and free, as God created them to be.

I have always defended her as my grandmother, my benefactress, and my true blood. I always will.

I just wish I could have told her so, before she died.

Until the news of her death settles and the real tears come, and I realize I’ll never eat another of her grilled cheeses or receive another card signed “Grandma Shirley” or laugh with her about that blasted day soaking a horse hoof in sub-zero temperatures, I think I shall take to the night and find solace on the back of my horse.